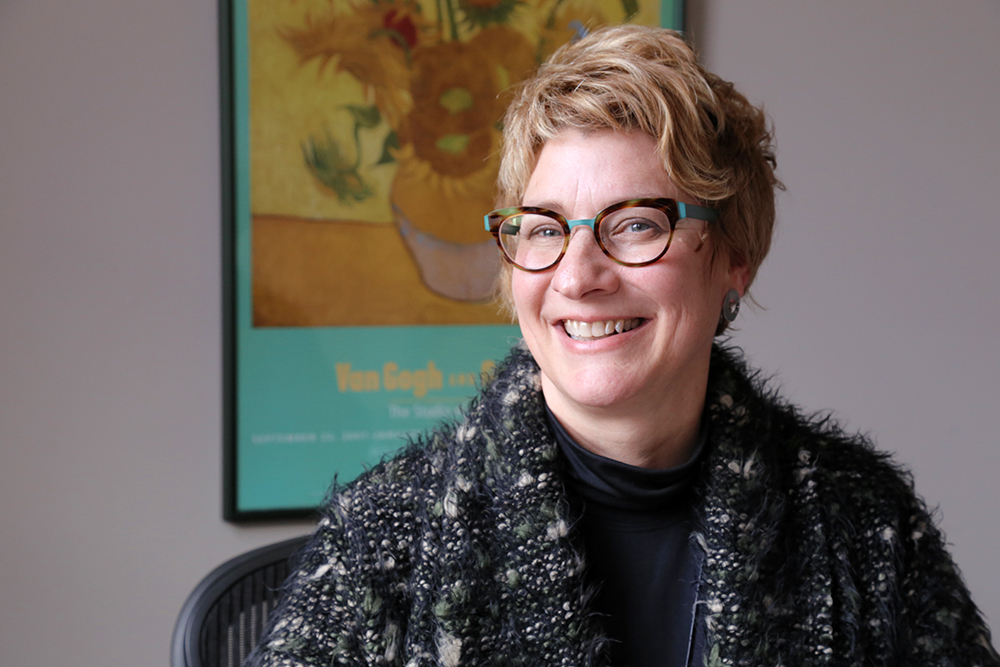 That’s the driving ethos behind Zoe Barsness’ work as chair of the Faculty Senate, the legislative body of faculty consisting of 122 elected senators who, together with the president, formulate regulations and procedures that govern and guide the University of Washington.

While some faculty might be inclined to stick to their own departments, focusing on their own research and pedagogy as a means to cement a reputation in a given field, Barsness believes that only by collaborating collectively can faculty truly hope to unleash their “profound power” to chart the future of the University—and shape their own destinies in the process.

“Faculty coming to the table to collaborate on the operational, governance side is the grease that makes this whole machine keep working,” she says. “We’re successful only to the degree we’re able to leverage the resources of faculty, staff, and students here and entice people to work together to tackle problems they care about.”

It’s a classic case of communicating vision while corralling diverse interests and abilities to achieve singular goals—a challenge to which Barsness, who otherwise serves as an associate professor at UW Tacoma’s Milgard School of Business specializing in management, is ideally suited. Her own scholarship in the field of organizational behavior (which knits together psychology, sociology, economics, and organizational theory) examines cross-cultural negotiation processes, the impact of communications technology, organization structure, and work arrangements on group process and effectiveness.

The first to fill the senate chair from one of the UW’s campuses beyond Seattle, Barsness is in many ways the embodiment of a broader University vision of access, opportunity, and advancement that is now becoming evident as the UW comes into its own as a multi-campus whole on a regional, national, and international level. For her part, she says she views her election to senate chair as indicative of the burgeoning strength of those cross-campus ties.

“To me, that was a huge statement as to how far that relationship has come in terms of how faculty on this campus think of UW Tacoma and UW Bothell,” she says of the senate vote that appointed her chair. “I think we’ve made strides in the last few years in raising the awareness of what the UW does and that investments in this institution pay back many fold to society and the world generally.”

It’s a question of making an affirmative case for public universities—a case Barsness believes faculty are best equipped to advocate with their unique ability to shape reform from within and public perception from without in equal measure, and to do so in such a way that proves to the public that a university’s role goes far beyond vocational training and that the arts, humanities, a mission of research and discovery all enrich the undergraduate experience.

“Faculty are at the heart of all the different journeys that make the University such an interesting, amazing place,” Barsness says. “Here, there’s a ferment of ideas which have an impact on the students, community, the region, and, at a place like the University of Washington, on a global level too.”

In one sense, Zoe Barsness has been helping organize universities since before she’d graduated high school—initially working midst the crush and din of that most high-stakes of collegiate environments: game day. Growing up just four blocks from Camp Randall Stadium in Madison, Wisconsin, she earned money parking cars on her parents’ lawn before Badgers football games.

While Barsness remains a steadfast Green Bay Packers fan, she says she’s always been drawn to the Pacific Northwest as a place to make a life. Shortly after getting her Ph.D. in Organizational Behavior from Northwestern University’s Kellogg School of Business in 1996, she considered taking a position at UW Bothell, but ultimately passed up the offer.

“It was an option to jump off the beaten track and do something completely non-traditional,” she says. “I didn’t feel daring enough to make the leap at the time.”

Instead, she took a position as faculty at Texas A&M, where an array of resources allowed her to collect a wealth of research data over the course of four years. But Texas wouldn’t hold her in the long-term and Washington kept calling—this time in the form of a former Northwestern classmate who was a founding faculty member at UW Tacoma’s Milgard School of Business

This time, Barsness accepted, joining the business school in 2000 as its eighth full-time faculty member. She says a large part of what attracted her to Milgard—then still only in its sixth year of existence—was the chance to engage in “institution building.”

“It was an opportunity to not just be an academic, but to actually develop a business program,” she says.

Barsness knew from her background in management and organizational behavior that institutions thrive only so far as their stakeholders—in this case, faculty members—are willing to take an active role in shaping them. It was the chance of a lifetime: to not only span “the bandwidth of the discipline” teaching students practicable skills, but to practice what she’d be teaching in the context of a complex, multifaceted institution.

“It’s an opportunity to apply the aspects of my own scholarship in real time,” she says of her role at UW Tacoma, adding that her recent terms as chair and vice chair have enhanced her teaching and scholarship by allowing her to explore the connections between challenges faced by the University and the types of intellectual questions and problems that interest her. “There’s definitely a huge feedback loop.”

Barsness cites the institutional knowledge and academic background of current University leadership as a factor that spurred her to seek the senate chair, along with the fact that she felt there was already a “great collaborative team in place on the faculty side.”

“I knew they were people I was enthusiastic about working with and that we could do good things together,” she says. “The opportunity to tackle some persistent, challenging problems was really appealing.

At present, she and the senate are spearheading revisions to the Student Conduct Code in an effort to make it, “a clearer, more transparent process that serves students better, ensuring equitable due process,” as well as overseeing task forces on improving the working experience of lecturers.

“We’ve been trying to tackle what the role of the lecturer is and how do we support and ensure better working conditions and career progression,” she says. “That’s tied back to broader issues of making a proactive case for what we provide and how it allows us to deliver that public good.”

Both initiatives tie back into the broader issue of making a proactive case for what the University provides the public, Barsness says, and have involved intensive collaboration between student groups, faculty, and the administration.

“We are the ones who are going to shape this institution,” she says. “It’s our collective effort that delivers an amazing experience. Where you have the motivation to be creative, there aren’t constraints on creativity.”

Zoe Barsness holds an A.B. in Comparative History from Harvard College and an M.S. and Ph.D. in Organizational Behavior from Northwestern University’s Kellogg School of Management. Learn more about the Faculty Senate, its current issues, and role in University governance here.