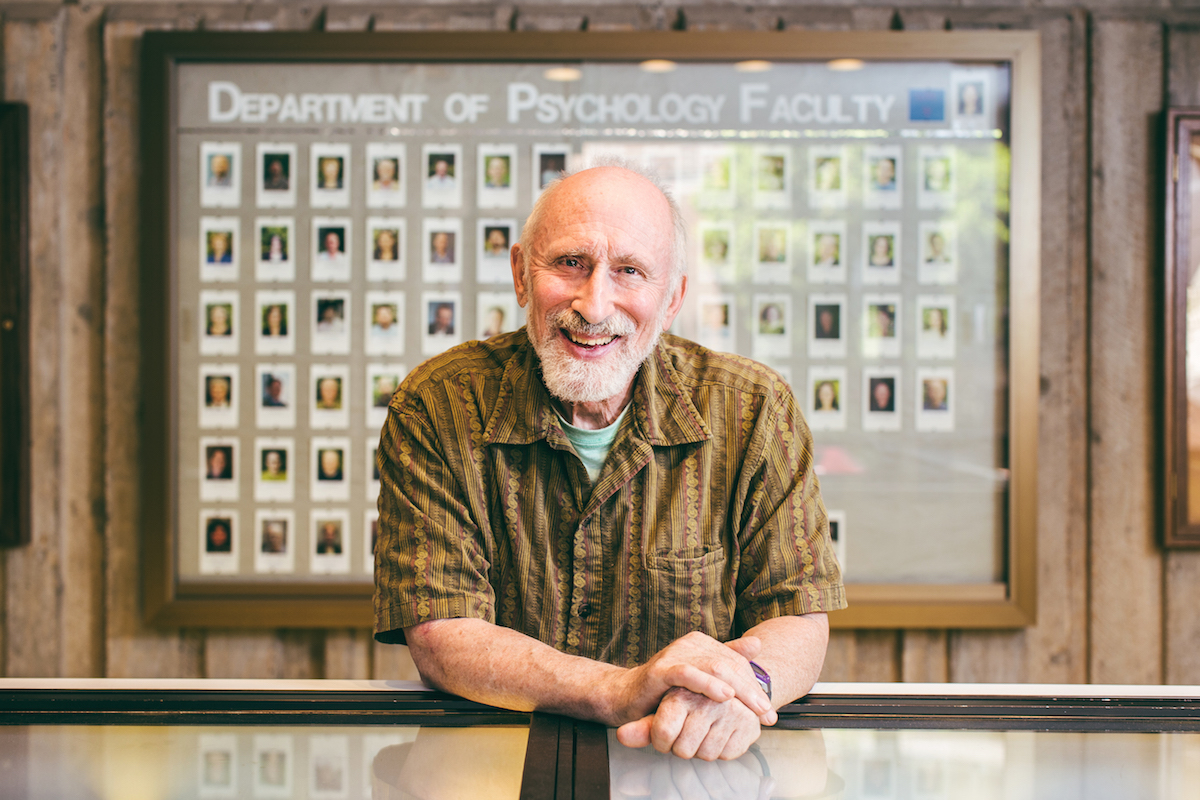 Don’t let the smile fool you: He’s one of the most dangerous men on campus.

At least that’s what some people say. In his four decades at the UW, psychology professor David Barash has been blacklisted by an academic watchdog group, the American Counsel of Trustees and Alumni, and featured in a book called The Professors: The 101 Most Dangerous Academics in America.

In both cases, his anti-war sentiments raised the red flags, and he considered both mentions flattering rather than frustrating. Barash is comfortable having stones cast his way, which is no surprise for a guy who wrote a book called Beloved Enemies: Our Need for Opponents.

He’s written and edited 37 other books about war and peace, lying and cheating, love and hate. Each explores the interplay of psychology and biology.

This quarter, in a class called Comparative Animal Behavior, Barash is teaching students how human beings fit into the animal kingdom. The course is centered around evolution, which Barash calls the fundamental building block of biology.

“It’s ironic that so many people think an evolutionary perspective diminishes human beings,” he said. “Rather than diminishing us, it expands us by showing our connectedness to the rest of the organic world. We’re not the same as other animals, but no animal is the same as another species.”

Common ancestry can be a touchy subject, even in science classes. Poll after poll shows that evolution still doesn’t sit well with many religious Americans, a topic that Barash wrote about in a New York Times editorial headlined “God, Darwin and My College Biology Class.” He’s more pessimistic than his peers about whether science and religion can, as he puts it, “be good friends.” In short, he says, the answer is no. At least not right now.

“They could be in theory,” he said, “but religion keeps on making so-called fact statements about the world. And they’re nearly always wrong.”

Barash isn’t shy about this in his class. He doesn’t hold back about politics, either. As an outspoken pacifist, he developed a course called Psychosocial Aspects of Nuclear War during the Reagan era (nearly a thousand students signed up). He wrote the first academic textbook on nuclear weapons, The Arms Race and Nuclear War, which was used at West Point in the 1980s.

A handful of his books were co-authored by his wife, psychiatrist Judith Eve Lipton. “When it’s good, it’s wonderful,” Barash said of the collaboration. “When it’s bad, it’s really bad. You can’t get away from your spouse.”

It can also be a bit… awkward. One of their projects, The Myth of Monogamy, suggests that it’s totally normal to be attracted to people other than your spouse. One solution? Think of it like nuclear war, where cheating is mutually assured destruction. Each person agrees to be faithful and not drive the other person crazy. If you do it, you blow up the marriage.

“It may not sound wonderful to have monogamy maintained by a threat,” Barash admitted, “but I think it is a legitimate contributor.”

He’s also penned books with two of his daughters. One of them went to the UW at age 14 and now teaches at the University of California, San Diego School of Medicine (their project was called The Mammal in the Mirror: Understanding Our Place in the Natural World). The other is a veterinarian-in-training at North Carolina State University (she teamed up with her father for Madame Bovary’s Ovaries: A Darwinian Look at Literature).

At some point even radicals have to retire. Barash has another name for it. Pretty soon, he said with a chuckle, it will be “time for me to graduate.”

Barash has a B.A. from Harpur College (now Binghamton University) and a Ph.D. from the University of Wisconsin Madison. His most recent book is Out of Eden: The Surprising Consequences of Polygamy.