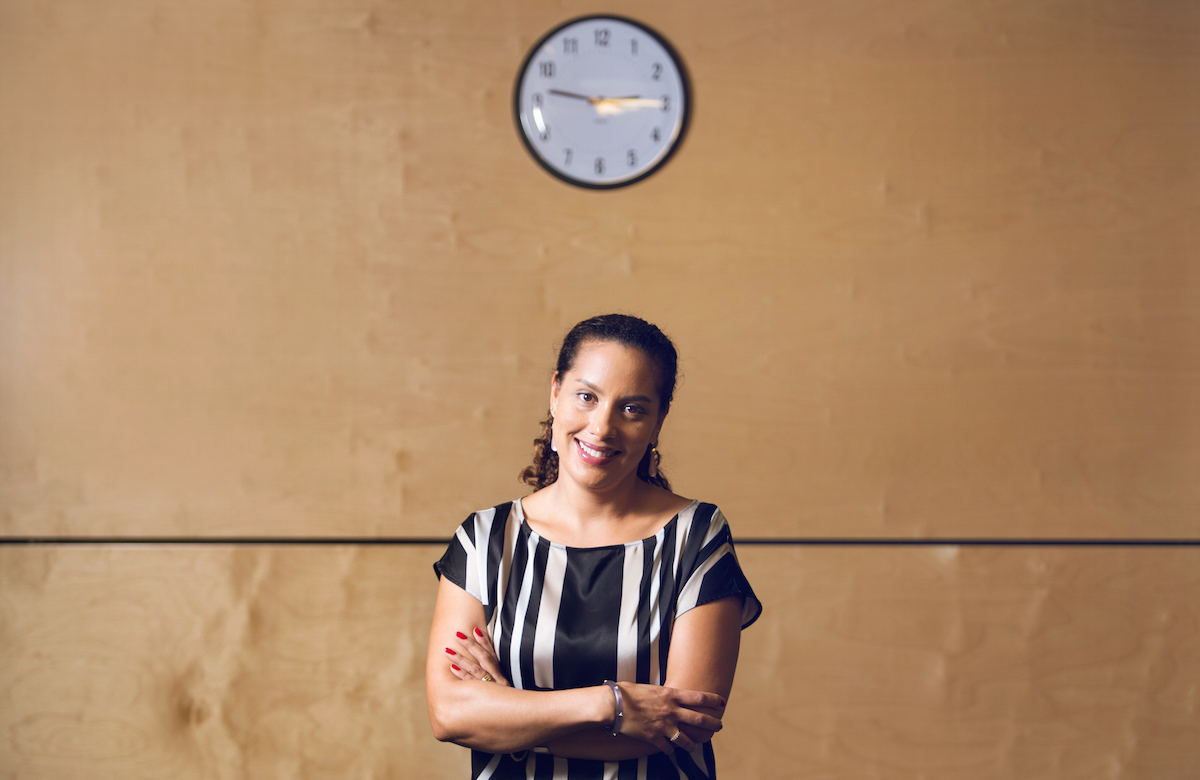 When Alexes Harris read a recent Seattle Times article about being black on a college campus, she was reminded of her undergraduate days at the University of Washington. The sociology professor took to Twitter to share her thoughts.

(2/3) Profs of color are working hard to create space for our students of color and for ourselves. Honors programs, WIRED, Purple Group
— Alexes Harris (@AlexesHarris) April 10, 2016

(3/3) But we definitely need more resources to continue to diversify & make us comfortable at UW. @amcauce Race & Equity Initiative a start.

In 1998, Washington voters ended affirmative action in our state by passing Initiative 200. Since then, the percentage of black students on the UW Seattle campus has remained between 2-4%. I sat down with Harris, who returned to the UW as a postdoc in 2002, to talk about her experience as both a student and a teacher on our campus.

What year did you come to the UW as an undergraduate, and why did you choose this school?

I was here 1993 to 1997. I chose UW because I was born and raised in Seattle. I went to Garfield High School and wanted to stay in Seattle.

When did you first feel a sense of isolation, and why?

It’s such a large university that so many people feel isolated in general. But when you add that layer of being black on this campus, it makes it extremely isolating. In the big classes, you kind of go and sit next to any brown people that are in there to try to make a connection.

This will probably be obvious, but I have to ask: Why was it important for you to be around people who looked like you? And why is it still important for students today?

They tend to understand you, and your perspective. You generally don’t have to explain things. When someone makes a comment that is offensive, you don’t have to explain why it’s offensive. I think people who look like you or were raised like you tend to understand that type of thing. It’s a cultural connection. I also had really good friends who were white. It’s not that you always want to be around people who look like you, but it’s nice to have that community — that connection — where you’re understood.

Sometimes it’s easy for white people to see black students or other students of color clustering together and say, “Why are they always hanging together?” But at the same time white people don’t tend to look at themselves and say, “Hey, wait, all of my friends are white.”

The Seattle Times article talked about a lot of microaggressions. One student said she was tired of being called “sassy” and “articulate,” and tired of being asked if people could touch her hair. A white reader might respond, “If you’re tired of people asking to touch your hair, just say no.” Why do these things matter?

It wears you down to constantly get these little comments related to race, or to gender, or to status. For one, they’re insulting. I had a senior colleague visit here, and he referenced work in my area, but not directly my work. I thought, “Fine, maybe he didn’t know I did research in that area.” So afterwards, another colleague said, “Hey, you know Alexes is published in this area?” And he said, “Oh, I know — with [collaborator’s name]. If she were in the room, I would’ve said something.”

If your collaborator was in the room, he would have given credit?

Yes, if she was in the room. She is white, and senior to me. I was at the table. That’s a microaggression. It’s like, why couldn’t you acknowledge me? Why did you have to have the senior white woman in the room to acknowledge the work?

You keep trying to understand it when it doesn’t make sense, and you waste time doing that. And then you get mad, and you spend time thinking about what you should have said in response. It’s all that mental and emotional energy. If you have comments like that — a couple a day, a couple a week — it wears you down. That’s why you need a community to go to and say, “Can you believe this?” And someone will say, “Yeah, I believe it — it happened to me yesterday.”

Was it just that there weren’t enough students of color when you went here, or were there not enough institutions to go to for support?

We had the Ethnic Cultural Center, and there was a place in the HUB where a lot of black students would congregate. We had Sisterhood and I joined a historically black sorority, Delta Sigma Theta. There were spaces you could go to, but it’s when you go to your classes that you were really by yourself. That can feel really isolating — when race comes up and you feel like everyone is looking at you.

Statistically, you might be more isolated today as a faculty member than you were as a student. African Americans make up less than 2% of faculty at UW, and in the 2014-15 school year, there were only two new hires who were African American — compared to 178 white faculty members. That’s an 89-to-1 ratio. This might be too direct of a question, but how does that make you feel?

It’s frustrating. People have excuses, and they talk about the “pipeline” and competitiveness, but whatever — that’s all smoke and mirrors. We can hire more faculty of color. I think this year they may have done a better job; I think we can do a better job.

Numbers are crucial for so many different reasons. One, to create more of a space for us to be successful. Particularly, junior faculty need to have cluster hires so they can have support going through the ranks. But also, we do a lot of work: we do the same amount of work in terms of scholarship that our white colleagues do — publishing, getting grants — but we also do a lot of work with mentorship of students. I just had a student call me who graduated two years ago. She’s pregnant and she’s a woman of color, so she wanted to talk about those issues.

I talk to students within my department and across campus — from health sciences to the law school. I want to play that role because people did that for me, but it’s a lot of work. I’m on two senior-level search committees right now. I’m the chair of a campus-wide committee. We need more people to share that work, and we need to be compensated for the work. We need to balance out our time, or receive “credit” towards promotion, or have this “extra” work count toward our required courses we teach.

What do you think of the Race & Equity Initiative?

I think it’s a good starting point. Definitely a move in the right direction. The conversations are good. President Cauce coming out and urging everyone to think about their privilege and talking about microaggressions and our individual biases is really good. I think the direction they’re moving in is to think about how to create systemic change within the institution — to change not just the culture and conversations about microaggressions, but to ask where are the numbers? What are we doing structurally to address issues about diversity and inclusion? How are we attracting students, faculty, and staff to this university? How are we retaining them? How are we making them happy and comfortable in this space?

The percentage of black students hasn’t really changed since you were here. I’m guessing you would like to see Initiative 200 overturned.

I think that would be a helpful step forward, because I-200 creates so many barriers. More people need to have an opportunity to get into the door. A lot of people say, “If you repeal I-200, people are going to be tokenized again.” But even with I-200, people still think that when they see students or faculty of color — particularly if they’re African American or Hispanic — that they’re tokens.

There’s also a looming Supreme Court ruling that could strike down affirmative action across America. I’m assuming you’re rooting for that not to happen.

Right. I just think it’s going backwards. Affirmative action is not tokenism; it’s recognizing the inequalities that exist. It is affirmatively taking steps to right the wrongs of the past. People are so naive to say, “That was a long time ago.” But scholarship in sociology has shown that those moments in history, those acts in history, have created structural inequalities that are embedded within all of our institutions in society. We need to right those wrongs, and it’s going to take a long time to fix the problems that have been created. We need to take affirmative action to address the wrongs done to communities of color.

We’ve talked a lot about what could be better at the UW, but it seems like there are so many motivated scholars of color on campus. You must be constantly inspired by the people who are studying here today.

Yes, this is the next generation of academia. It is exciting because many of the faculty of color bring other ideas that haven’t been on the table. We tend to include types of material that have previously been ignored. We ask different sets of questions. Having more diversity on campus just makes the intellectual experience better for our students. It could be in Foster, the law school, science, everywhere — to broaden the possibilities of research questions, of types of data questions and methodologies. It makes us stronger, more thoughtful, and it makes us better.

Harris has a B.A. from the UW and an M.A. and Ph.D. from the University of California, Los Angeles. She has been a faculty affiliate at the West Coast Poverty Center since 2008. Her new book, A Pound of Flesh: Monetary Sanctions as a Punishment for the Poor, is due out this year.

Great to hear your emotions, personality and leadership in this article Alexes. You are strengthening a community and momentum for positive change.

As a white educator, I am inspired now as I was when I participated in one of your graduate seminars, to continue my own learning about the experiences of students of color. Supporting students that continue to be marginalized is critical work.
I could not agree more that learning for all is improved by increased diversity on campus!