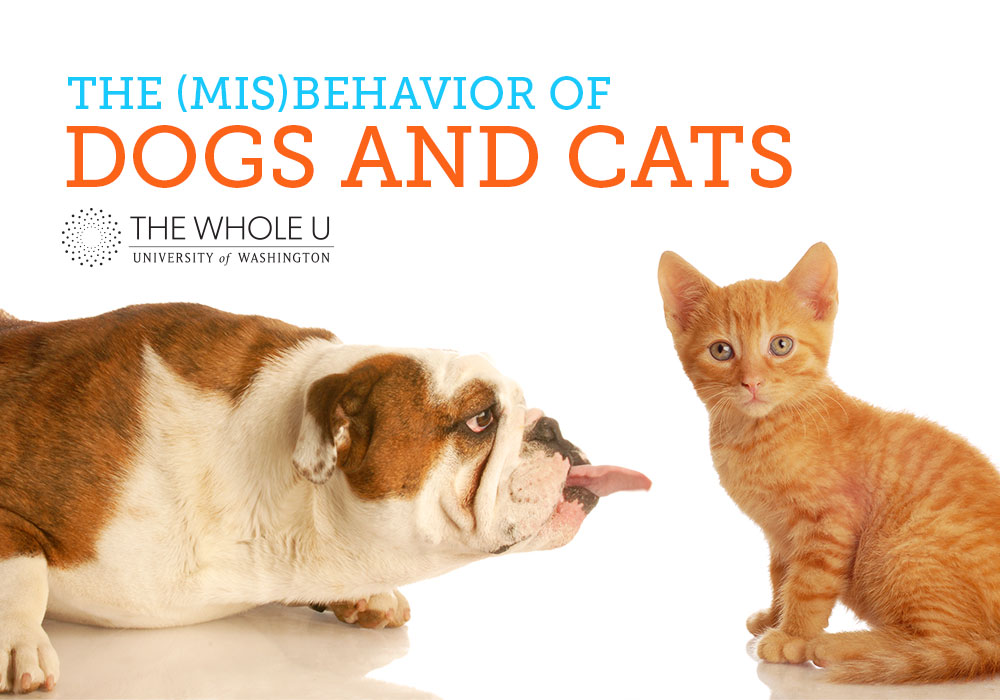 If you need help with your pet, you’re not alone.

Over 150 people rushed to register for our upcoming seminar The (Mis)Behavior of Cats & Dogs: An Introduction to Applied Animal Behavior with UW Professor James Ha. The event is currently full, but we’re doing a contest for front-row seats. I talked with Dr. Ha to hear about what he’ll be presenting.

Like both his father and his grandfather, Dr. Ha is an animal behaviorist, and he teaches classes about the subject for UW’s Certificate in Applied Animal Behavior (he runs the program with his wife, Dr. Renee Ha, who also happens to be an animal behaviorist). As a research professor in the Department of Psychology, he has studied primates, crows, killer whales, and, most recently, companion animals such as dogs and cats.

On top of his research and teaching at UW, Dr. Ha works at Adaptive Animals, a clinic of animal behavior consultants in Seattle. Since veterinarians don’t receive any behavior training, they often refer pet owners to specialists when faced with problems that don’t stem from physical ailments. Most of Dr. Ha’s cases involve dog aggression.

“The vast majority of dog aggression is because of anxiety,” he said. “It’s not dominance. It’s not territoriality. It’s not viciousness. It’s not breed-specific.”

Dr. Ha has a three-step approach to easing an anxious dog away from anger. The first is managing an issue.

“If there’s something that’s causing anxiety in the dog, don’t let the dog get close to that,” he said. “If the dog gets aggressive because it’s afraid of the dark, don’t take it for a walk in the dark.”

The second and primary step is counterconditioning, which is combining something that the dog is afraid of with something that will make the dog happy (usually a food reward). The third step, which is a last resort, is anti-anxiety medication.

Not included in Dr. Ha’s approach to animal behavior is physical punishment. Since he’s mostly dealing with anxiety, his practice is entirely based on positive reinforcement.

So what can you do to keep your dog away from Dr. Ha’s office in the first place? Any kind of training.

“Dogs want attention and dogs need rules,” Dr. Ha said. “So many humans think they can just forget about them. I don’t care if you do obedience training, or show training, or agility, or flyball. What I really mean is interaction.”

When it comes to food, for example, Dr. Ha recommends a work-to-eat program, which requires dogs to earn their meals through puzzle figures or training. Things like that create more stimulation and reduce boredom. In other words, throwing the food in the bowl twice a day might be too predictable.

Some people might be skeptical of animal behaviorists. After all, isn’t one doctor enough for your dog? At the end of the day, aren’t pets just… pets?

Dr. Ha thinks it’s deeper than that. “Philosophers have said for a long time that there’s something in human nature that seeks out a connection to our ancestors,” he said. “I think dogs and cats and other pets represent a real connection to nature and the wild.”

That’s not all. Dr. Ha says that since the demographics of American families are changing, so too are the relationships we have with our pets. Kids are moving further and further away from their parents and waiting longer and longer to have children of their own; as a result, pets are serving as both empty nest replacements and parental pilot studies.

“It’s having something to take care of and to love,” Dr. Ha said. “In the best possible way, it’s replacing children and the role that children play.”

As for problems with your biological kids, Dr. Ha can’t help.

“Humans are too complicated for me,” he said.

Thank you to Dr. Ha for sharing his expertise at our event on Thursday, April 16. To win a spot, or to upgrade your seat, submit a photo of your favorite animal to wholeu@uw.edu or post it to our Facebook page. We’ll share all the pet pics on social media and give away VIP seating to 10 UW faculty and staff. See examples, and our best friends, here.

One Thought on “Dr. James Ha on Animal Behavior”

Any chance this will be archived for others to view? Sounds like a very interesting topic.