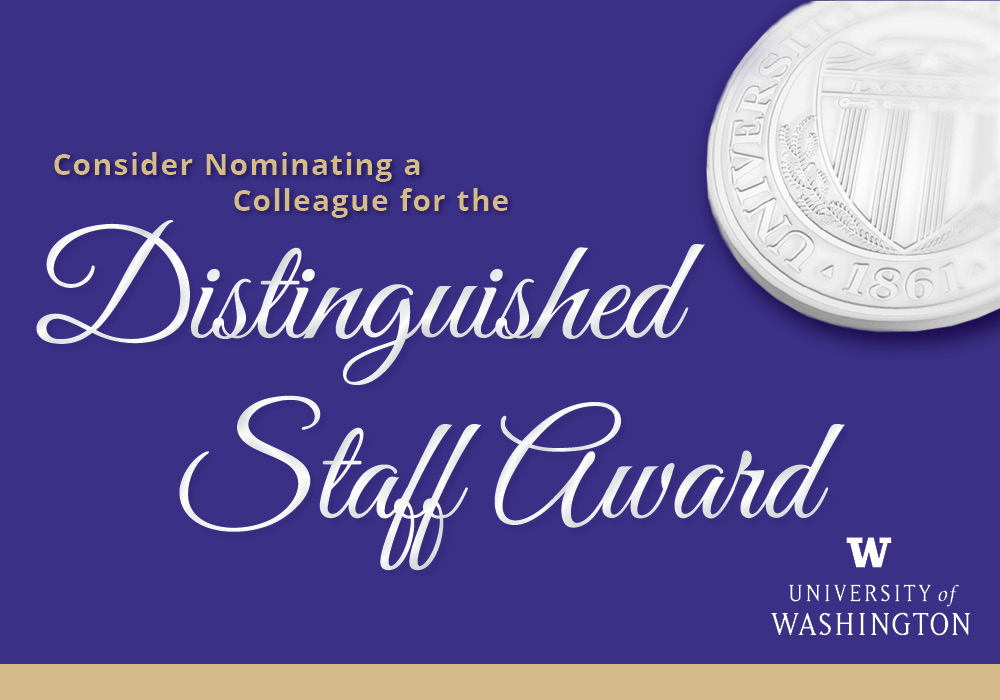 The Distinguished Staff Award (DSA) is the highest honor a staff member can receive at the UW. When you nominate a person or team for the award, you’re recognizing them for either a special one-time project or exceptional performance over time. I spoke with several DSA recipients on their experiences from the time they were nominated to formally accepting their awards at the annual Awards of Excellence ceremony.

While most of the award recipients were aware of the DSA program prior to their nomination, actually being nominated was a huge surprise to everyone. Carol Kummet explains: “It was humbling, exciting, and embarrassing to be nominated by colleagues and supervisors who could win the Distinguished Staff Award themselves! Once I was nominated, I had many staff members from different departments seek me out to congratulate me on the nomination. Their enthusiasm showed how respected the award was to so many.”

Sometimes, a nominee can gain new insight as to how they are viewed by their peers or the people they manage when they read their nominations. For example, LeAnne Wiles had never thought of herself as a mentor, yet several of her support letters mentioned exactly that. A former director in Cynthia Anderson’s department wrote, “It’s a bit mesmerizing to watch the changes in facial expressions as students come and go through her office door. My sense is that Cynthia really does believe that every student is a miracle waiting to happen, and that her absolute sincerity about this also convinces the students with whom she is consulting.”

Cynthia Anderson had a voicemail from Mindy Kornberg, vice president of Human Resources. “When I called her back, she congratulated me and I think I said thank you about 10 times – I couldn’t believe it! I ran into Amy Peloff’s (CHID assistant director) office and said, “I won, Amy! They chose me for the Distinguished Staff Award!” We jumped up and down in her office and then Amy grabbed a bell out of my office that our seniors get to ring when they turn in their thesis project. She told me to ring it as loud as I could, so everyone up and down the halls of Padelford could celebrate with us!”

And Rob Lubin doesn’t remember much about his call, except that at one point he jokingly asked Mindy, “Am I worthy?”

What effect did receiving the Distinguished Staff Award have on these staff members? For LeAnne Wiles, it meant more people recognizing the work of First Year Programs at meetings across campus and an increased number of partnerships with other faculty and staff. According to LeAnne, “Receiving the award was one of the most impactful highlights of my career.”

Tom Pieples and Fred Ellis are part of a team that won the award four years ago, but they still talk about when they first found out they were nominated and when they won. “Receiving the award gave me pride in and an appreciation of people at the University,” said Tom.

According to Kojay Pan, “Nominating a deserving colleague is a great way to bring positive attention to your department. Often times, a nomination can add to the positive momentum of a department and generate buzz so that prospective faculty, staff, and students want to be a part of it.”

The nomination period is open now until November 21. Please consider nominating–it’s easy to get started by checking out the newly designed Distinguished Staff Award website and learning the steps you can take to recognize a deserving colleague or team.

“Having a good job to do is a gift. Being recognized for doing it was absolutely the kindest thing I have experienced in my career.” –Carol Kummet

Distinguished Staff Award recipients in article, in order of appearance in article: